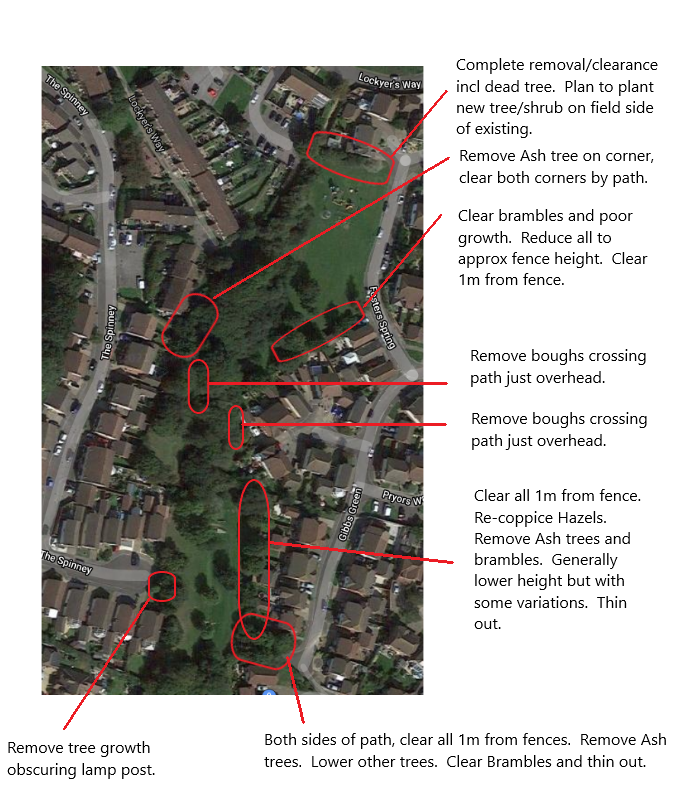 As previously reported, Foxhills Tree work is due to start in November.

In keeping with our village environment, the Foxhills estate was originally designed to include a large number of trees in the open spaces. However, many of these have grown to a height that is now out of proportion for the spaces they are in. As a consequence, the Parish Council has taken advice on what needs to be done to maintain the trees on the perimeter and along the pathways.

Low boughs over the paths need to be lopped off and some of the Ash trees also need to be removed to clear access to the paths. The Hazels need to be re-coppiced. Dead plants need to be completely removed and replanted and many, many brambles need to be removed. The remaining trees and bushes need to be thinned out and will either be reduced in height or removed entirely to preserve the overall aesthetic but with a lower height line. The central area will remain as it is, with a huge number of trees and shrubs to support wildlife. Around the outside, the goal is to provide a 1m wide  clear maintenance access between the fences. Overall, the sight lines will be the same, but the short-range views from properties should be improved. The attached diagram also gives a broad overview of the planned work.

The properties most affected by this are those on Fosters Spring, Gibbs Green and Keates Meadow adjacent to open space. The council has contacted householders here individually and following consultation, their comments and considerations have been incorporated into discussion with tree surgeons to plan and quote for the work.

The contract has now been awarded and we hope that the tree work to the perimeter of Foxhills Open space, and the Ash Trees by the garages in Hannam’s Close, will take place late in November/early in December.  We will confirm the date by letter to neighbouring properties once confirmed.

Update on the Plans for the Foxhills Trees