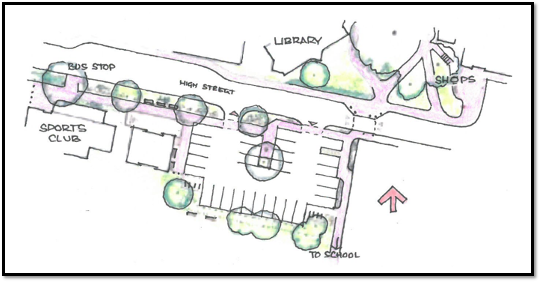 2020 has been a very unusual and difficult year for our village, along with the rest of the world. It goes without saying that we all hope that 2021 will usher in a new norm that allows us to work and socialise in ways that we used to.

However, it has also been a very busy year with some major advances in the village centre project. We now have a redesigned carpark that includes electric charging points and new bike stands. The electric charging points can output up to 22kW, which would give 11kWh in half an hour, equating to around 35-40 miles depending on the efficiency of the car and how fast you drive! You need to download Gronn Kontakt App to use them. As December progresses, the tree planting will begin in earnest along with new flowers and shrubs along the verges.

You may also have seen the new widened path from the Rec down to Eldons Drove. The Rec path has been extended from Rocket Park to a new wide entrance to the downward path. The slope has been evened out and a seat provided halfway up. We intend to clear more undergrowth and hopefully reveal the old pond in the New Year.

This is part of the walking route to the school and the next stage is the lane from Eldons Drove to the rear of the school playing field – to be renamed School Walk. This will be getting underway in December, weather permitting – with a new gate to allow access but maintain safety for all by preventing cars from driving down there. Earlier in the year we also replaced the fencing around Rocket Park to make that safe again.

Other aspects of the village centre plan will be reviewed early next year and we are still working with DC highways to try and improve the road crossing on the High Street and relandscape the public space and steps between the Pharmacy and Tesco’s.