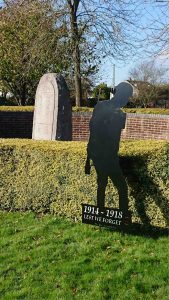 Due to the generosity of local resident, Russell Matthews, Lytchett Matravers now has its own standing soldier. This has been erected at the War Memorial and will be in place throughout the Remembrance period.

The standing soldier was initially to commemorate those who fell in the First World War, but has come to remind us all of the horror and suffering as a result of any war. We must endeavour to not go there again.

While there will not a public service at the War Memorial this year, residents are invited to lay their own wreaths as they wish.

Our own standing solider and Remembrance period